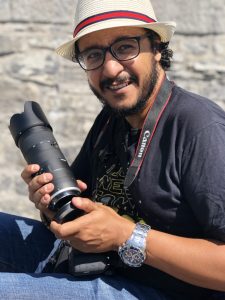 Ahmed Ragab is the Richmond Visiting Professor of Science and Technology Studies.

Ragab is the founding Director of the Center for Black, Brown and Queer Studies. He is an historian of science and medicine in the Islamic world, and of colonial and postcolonial medicine and science. His work is deeply shaped by critical race theory, postcolonial and decolonial studies and queer theory.

Ragab’s work addresses various questions related to medical cultures in the medieval and early modern Islamic world, as well as the impact of such cultures on contemporary Muslims in the postcolonial world, and in the US.

Ragab also investigates debates on progress and reform in the nineteenth and twentieth century, the establishment of new medical and scientific faculties in the region, and the formation of new scientific elites. His most recent works have paid attention to the affective economies underwriting the making of colonial and postcolonial science and medicine. Ragab’s work addresses the place of science and medicine in the US global empire, and in the lived experiences of minorities and diasporic communities in the US and Western Europe.

Ragab is also a filmmaker and a founder of Pinwheel Productions, a production company dedicated to stories for and by people of color and queer people.

Bibliography (Published and in Preparation)

Medicine and Religion in the Life of an Ottoman Sheikh: Al-Damanhuri’s “Clear Statement” on anatomy (Routledge, 2019)

Books in Preparation (under contract)

[Co-authored with Katharine Park] Communities of Knowledge: Science and Religion in Europe and the Lands of Islam (Under contract with Princeton University Press)

Around the Clock: Time in medieval Islamic clinical cultures (Under Contract with Johns Hopkins University Press)

“Illness and the city: Preliminary notes on the place of hospitals in Muslim pietistic spaces,” Journal of Islamic and Muslim Studies 3:2. (2019) Pp. 1-20.

“Prophetic traditions and modern medicine in the Middle East: Resurrection, reinterpretation, and reconstruction,” Journal of the American Oriental Society, 132:4, (2012). Pp. 657-73.

“Sira and asbab al-nuzul: Context as commentary” in The Routledge Companion to the Quran, Daniel A. Madigan, Maria Massi Dakake, and George Archer (eds.), London: Routledge, 2021

“The piety of health: The making of health in Islamic religious narratives” in Islam and Biomedicine, Al-Akiti, Afifi, Padela, Aasim (eds.), Geneva: Springer, 2020

Articles and book sections (forthcoming or under review)

“‘Until God showed us the path’: Adab, diraya and intentions in early Hadith” The Bulletin of the School of Oriental and African Studies (BSOAS) [forthcoming]

“Translation and the making of a medical archive: The case of the Islamic ‘Translation Movement’” Osiris [Under review]

Director, The Center for Black, Brown, and Queer Studies

Member, Advisory Committee—Science and Religion at The Smithsonian, National Museums of American History.

Member, Editorial Board—Bulletin of the History of Medicine.

Member, Committee on Diversity and Inoculation, the American Association of the History of Medicine.

Covid-19 is an ongoing concern in our region, including on campus. Safety measures are in place, and campus community members and guests are additionally advised to take personal precautions. See the college's Covid-19 website for information about campus policies. For the latest research and recommendations from the CDC, visit cdc.gov/coronavirus.